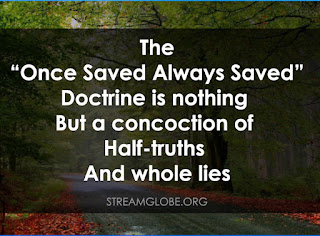 1 Corinthians 5:1-2 (NET)
It is actually reported that sexual immorality exists among you, the kind of immorality that is not permitted even among the Gentiles, so that someone is cohabiting with his father’s wife. And you are proud! Shouldn’t you have been deeply sorrowful instead and removed the one who did this from among you?

Femi now decided he was in the wrong church when he witnessed two ladies in his pastor’s office arguing over a man. One of them claimed the other stole him from her. Femi was surprised that in the presence of their pastor, the two ladies were not even ashamed of the fact that they were both sleeping with the man in question.

You see, their pastor had started teaching certain new doctrines concerning ‘grace’, and he had subscribed to the “once saved always saved” doctrine. A doctrine that is nothing but a concoction of half-truths and whole lies.

Apostle Paul was embarrassed by the behavior of the Corinthians because, despite the shameful conduct of one of them, they were still proud. They probably felt the brother’s eternal life was secure no matter what, but they were wrong. They needed to take a desperate measure in order to ensure that they do not lose that brother eternally (see 1 Cor 5:5).

Go into today remembering that unrepented sin in the life a believer is not a small matter in the sight of God. We are to lay aside weights and sins that easily entangle (see Heb 12:1). We are never to use grace as an excuse to continue in sin (see Rom 6:1-2).

Get sermons here☞ streamglobe.org/34
Streamglobe is interdenominational. Kindly share this Devotional with your contacts and let’s touch lives together.