Ever seen or heard of the critically acclaimed movie “300”? It is a fictional retelling of the Battle of Thermopylae in the Persian Wars. The story tells about a King who led an army of 300 men, to defend the Hot Gates (Thermopylae) against the advance of the mighty Persian armies. The movie depicts the ‘heroic’ efforts and sacrifice of the 300 Spartans who simply defied the odds to stand against the Persians, and even though they were outnumbered, they simply refused to yield. Most people watch this historical fantasy, as the movie is classified, and get goosebumps. Well, the Bible tells us the story of 300 men carefully chosen by God to deliver His people from their enemies.

Judges chapters 6 and 7 records this amazing story. God had raised an unlikely hero in the person of Gideon, unlike Leonidas (of the 300 Spartans story) who was a warrior king trained from childhood in the art of war and combat, Gideon was that man who was conducting his family business in hiding because he was afraid of their oppressors. He wasn’t some guy with 6 packs and bulging biceps overflowing with courage and confidence. He was just your average joe from most indications. Do note that God is in the business of raising ordinary men to do extraordinary things for Him.

However, after an encounter with God, through his angel, Gideon became another man. And the first thing he did thereafter was to pull down the temple of Baal in his father’s house. Because you see, when God becomes Lord in your life, one of the very first manifestations will be the pulling down of idolatry and all its vestiges. Thereafter, Gideon raised an army of 32,000. Sufficient, right? Not nearly so, not when you are faced with an enemy too numerous to count (See Judges 7:12) and guess what God asked him to do, request for reinforcement? No. He said,

“There are too many of you! I can’t let all of you fight the Midianites, for then the people of Israel will boast to me that they saved themselves by their own strength! Send home any of your men who are timid and frightened.” (Judges 7:2-3 Living Bible) Gideon did and they were left with 10,000 men and yet the Lord insisted that there were still too many. He cut their number to 300 men and with them he defeated the “too-many-to-number” soldiers of the Midianites and Amalekites, demonstrating that having God on your side is more important and beneficial than having statistics in your favor.

Remember, those three hundred were the ones who were not unafraid and timid. Are you confident in the fact that you know the Lord?

Go into today reassured that if God be for you, no man can prevail in being against you. Desert every false way and stand firm in the faithful hands of the Lord.

Because GOD is for me, no one can prevail in being against me
—Abraham Damilola Arigi

If you wish to start getting Streamglobe Devotional Text & Audio early every day, Send us a message or Click here to join a Streamglobe WhatsApp Group☞ https://chat.whatsapp.com/IpIyi4YBzxJAMphlwMaNBW 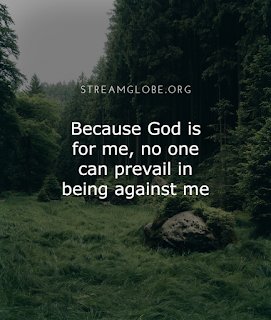