Ephesians 6:2-3 (NET) “Honor your father and mother,” which is the first commandment accompanied by a promise, namely, “that it may go well with you and that you will live a long time on the earth.”

After Joe became a believer in Christ Jesus, one of the things he learned was that he was to honor his parents. He was at odds with his parents because he believed they did not make any effort to give him a bright future. They did not send him to school. The little education he got, he got because of his strong desire and determination to break the circle of poverty. But even though he had been working really hard, he still struggled to live above poverty. He broke all contact with his parents because of the bitterness in his heart towards them.

After being a believer for some time, it became clear to him that he was operating under a demonic yoke of poverty and lack. As he discussed this with his discipler, the Holy Spirit revealed to his discipler that this yoke of poverty was only able to operate in his life because of the bitterness in his heart towards his parents [that led to him disobeying an express comamd of the Lord]. After Joe forgave his parents and started honoring them, the yoke was destroyed and his business started operating under an open heaven.

The first commandment with a promise in scripture is that children honor their parents.

We have been blessed with all spiritual blessings in heavenly places (Ephesians 1:3), but the way to transmit these blessings to our earthly experiences is by the promises of God. 2 Peter 1:4 reveals that through the promises of God, we can partake of the divine nature, having escaped the corruption that is in the world through lust.

God’s promises are based on His conditions, that’s why they cannot be claimed by anyone but only by those who meet His conditions. As long as a person can meet the condition of any of God’s promises, he can appropriate it by faith in the name of Jesus.

Prayer: Lord, help me abide in you and activate all your promises for me by faith.
—Pst. Abraham Damilola Arigi

Streamglobe is nondenominational. Kindly share this Devotional with your contacts and let’s touch lives together.
Send testimonies and prayer requests here(WhatsApp): +2348034420524, +2348138224547 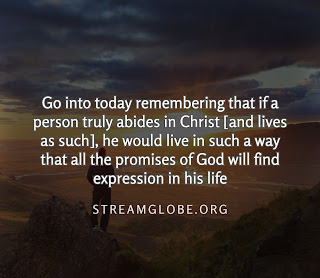