John 15:7 (NET) If you remain in me and my words remain in you, ask whatever you want, and it will be done for you.

After Ekene believed in the Lord Jesus and submitted himself to discipleship, he was excited to learn the truth in John 15:7. He was excited because he knew that because he was now abiding in the Lord, there was nothing he requested that God was not going to give him. So he went ahead to ask the Lord for the dream car he had always fantasized about having. After waiting for the car to come for months, it became evident to him that the Lord was not going to grant that particular request at that time. He was quite confused so he decided to ask his pastor why God did not grant his request even though he was now abiding in Christ.

His pastor asked him a simple question that he knew he could not answer. “I know you’re now abiding in the Lord and it is evident because you have repented and are now abiding in His church which is his body. But is His word truly abiding in you?”

Ekene knew that even though he could claim that he was now abiding in Christ, the word of Christ was not yet richly dwelling in him and he could not make claim to the promise of John 15:7. He thus was now determined to study the word, listen to sermons, read books – apply all diligence to fill his heart with the word of Christ ( Colossians 3:16).

What he observed as this happened was that his desires started changing. He observed that buying a Lamborghini was no longer a priority in his life. He now desired only the things that God desires and he realized that because his desires and the Lord’s desires were now the same, it was easy for him to get his requests from God because they now aligned with His will.

God does not usually answer prayers that are outside His will (1 John 5:14). The surest way to get answered prayers is to ensure that your requests are within the ambit of God’s will. The word of God is God’s tool by which he sanctifies us and changes us into His nature so that his will naturally becomes our will. Any believer that does not give priority to building his life according to God’s word will discover that many of his prayers will not be answered, and he will be unfruitful.

Prayer: Lord, from this day, help me give more priority to your word that I may become more like you. Deliver me from all the distractions that seek my affection.
—SD Abraham

Bible in 1 Year: John 13-15 (in today’s audio)Streamglobe is nondenominational. Kindly share this Devotional with your contacts and let’s touch lives together.
If you wish to start getting Streamglobe Devotional Text & Audio early every day, Send us a message or Click here to join a Streamglobe WhatsApp Group☞ https://chat.whatsapp.com/GmBySiw6w0BBKTGNr9rqyk 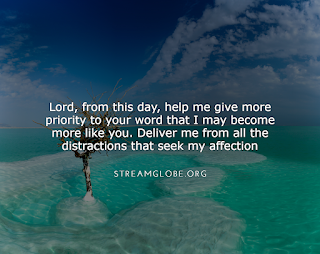