2 Timothy 2:12-13 (KJV) If we suffer, we shall also reign with him: if we deny him, he also will deny us: If we believe not, yet he abideth faithful: he cannot deny himself.

After Darrel read this Bible verse, he felt quite disturbed because all his life as a believer, he had never really been persecuted for his faith. He was born into a secular country where there was freedom of religion and no one was overtly persecuted for their faith. He thought within himself that ‘does this mean I will not be counted among those who would reign with the Lord when He returns because I have never suffered for Him?’
While he meditated on this, the Holy Spirit helped him remember the times he had been mocked and sidelined in the office because he refused to compromise his faith. He remembered the times he felt alone and almost rejected because he accepted the Lord Jesus and his old friends now despised him. He also remembered the times he had the opportunity to make fast money but wouldn’t because of his faith, and he looked like a fool to many(even so-called Christians). The Holy Spirit reminded him that while he went through all of that, the Lord was with Him to Comfort him, that was why he could go through such seasons and come out victorious.

In Philippians 3:10, Apostle Paul said: “that I may know Him, and the power of His resurrection, and the fellowship of His suffering…” There is a depth of knowledge of God that is accessed when we have gone through ‘stuff’ because of our faith in Christ.

I believe one reason why saints who overcome(see Revelation 3:21) have the destiny to sit on the throne of Christ with Him [and reign over all God’s creation with Him] is that our fragile lives here on earth give us certain privileges to know God in ways that even angels might not be able to know Him. We have the privilege of being able to say “I suffered with Him”.

You know that when you have a faithful friend you suffered with when things were tough, such a friend would have a special place in your heart, much more than the new friends you made when things became easy and abundant.

Go into today remembering that if you truly want to live for Christ and refuse to compromise your faith in this corrupt world, it will fight back. When the world fights back and you pass through unpleasantness that you normally wouldn’t have faced if you were an unbeliever, that suffering you passed through because of your faith counts in heaven.

Streamglobe is Interdenominational and nondenominational. Kindly share this Devotional with your contacts and let’s touch lives together.

To start getting Streamglobe Devotional Text & Audio early every day, join our WhatsApp Group here☞ https://chat.whatsapp.com/GvVFJFXWXJMENumQjx4VcG
Or Send us a message on WhatsApp: +1 (515) 519-5600, +2348138224547
visit: www.streamglobe.org 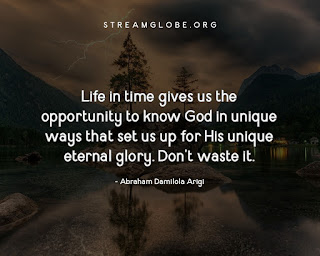