Not long ago, I spoke with a servant of God who was in an American hospital to visit some folks. While he was there, he saw some white men praying and speaking in tongues. But as he listened carefully, he noticed that one of them was speaking his local African language. He first thought the man understood the language, but when he talked to the man later, it was clear that the man was simply praying in tongues and did not understand the language in question. The white men were so excited when they heard the interpretation of what was said because it agreed with their prayer point.

I remember the first time someone interpreted my tongues. I was simply praying in tongues to God, and this man sitting near me gave me the interpretation of my prayer in tongues. I was so excited because the things he said I was praying were exactly the burden in my heart at that moment. This man didn’t know me so there was no way he could have known those things, but he heard me praying in tongues and could interpret my prayers. From that day, I took my prayer in tongues a little more seriously.

The gift of interpretation of tongues is one that enables those who have it to know the meaning of certain tongues they hear. It could happen that they begin to hear someone’s tongues in a language they understand, or they just simply begin to know the meaning of the tongues they hear, whether the tongues are messages from God to people (in which case it must be interpreted) or prayers to God. Those who have the gift of diverse tongues usually also have the gift of interpretation of tongues. When a message is given to people in tongues, it is important that the message is interpreted if the message would profit them.

Go into today remembering that spiritual gifts were given to profit withal. Those who have a desire for the increase of God’s kingdom will more easily walk in spiritual gifts.
—Abraham Damilola Arigi

BIBLE IN ONE YEAR: Nehemiah 10-13 (In Devotional Audio)

Streamglobe is nondenominational and interdenominational. Kindly share this Devotional with your contacts and let’s touch lives together.

Tune In to Our 24/7 Online Radio Here (open with Chrome of Safari): https://streamglobe.org/radio 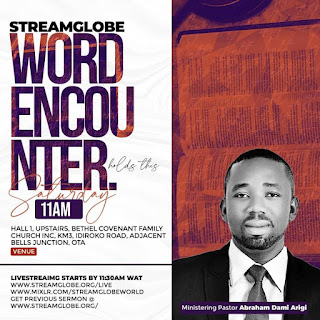