God had promised Abram an heir from his own bowels (Genesis 15:1-4), but when that seemed delayed, Sarai his wife counseled him to marry Hagar her maid, he listened to her and Ishmael was the result. Ishmael however wasn’t God’s planned heir for Abraham because God eventually gave him Isaac who became his heir. Just as death was the result of Adam’s sin when he listened to his wife’s wrong counsel (Genesis 2:17), a wild man was the result of Abram listening to his wife’s wrong advice (Genesis 16:12).

According to Genesis 2:18 and 20, a wife is a woman given to a man by God to sit in the seat of a helper for that man. God knows that man has certain weaknesses, he also knows that he cannot help himself in those areas, therefore, God made him a helper. But when help fails, weaknesses become obvious just as it happened with Adam when he fell and Abram when he brought Ishmael forth. Both unfortunate consequences could have been avoided if the women involved had not failed as helpers.

Another person called helper in the Bible is the Holy Spirit and one of his duties is to help our infirmities or weaknesses (Romans 8:26). If a woman wants to serve God acceptably in the capacity of a wife, she must be very conversant with the person of the Holy Spirit by studying him, knowing how he operates, and learning from him because, she will need to operate in similar ways, if she must function as a good wife who’s services will be acceptable to God.

Go into today knowing that being a woman is not a disadvantage neither is it a curse, instead, a wife is her husband’s advantage, his strength when he is weak. She is a major player in determining whether or not God’s counsel for the union will be accomplished. The wife is sent by God to her husband to help make up for his faults and weaknesses.

Streamglobe is nondenominational and interdenominational. Kindly share this Devotional with your contacts and let’s touch lives together.

If you wish to start getting Streamglobe Devotional Text & Audio early every day, Send us a message or Click here to join a Streamglobe WhatsApp Group☞ https://chat.whatsapp.com/FXfLqhjOHzxKer8ejNR8v3 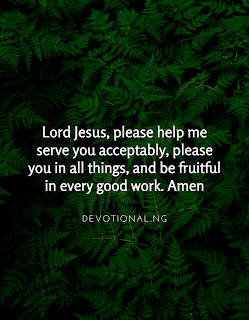