Daniel 11:32 (KJV) And such as do wickedly against the covenant shall he corrupt by flatteries: but the people that do know their God shall be strong, and do exploits.

Sandra was strong because she knew the Lord. This was not a coincidence, it was because of deliberate actions she took to seek the Lord- She made time to pray, study and meditate on the word each day.Before that year, if someone had told her what Mrs. Charles told her, she would have broken down in tears and entered another season of depression. It happened like that when she turned 32 and her grandma told her she was now an old maiden. It happened again when her aunt asked her when she was getting married because time was no more on her side.

But because she was now strong in the Lord and no longer heavy and depressed but had a cheerful and joyful countenance, the word the Lord gave to her came to fruition just as she heard it. She met Uche Amadi the next week, and he wanted to marry her. He was two years older than her and was already a professor. She didn’t waste time to accept his proposal because the Lord had already spoken to her that she was going to enter a relationship and get married soon.

If she had allowed the words of Mrs. Charles to get to her and she entered her usual season of depression and heaviness, she would have missed her husband because her heaviness and sad countenance would have driven him away.

In Ephesians 6:9, we see that in order for us to put on the whole armor of God, we have to first be strong in the Lord. Knowing the Lord through fellowship with Him Him is the way we receive His strength.

Go into today remembering that knowing the Lord does not just multiply his grace and peace in your lives, it increases your strength and ability to do His will.

Prayer: Lord, help me know you more each day, and walk in your glorious light. Amen.

Streamglobe is nondenominational. Kindly share this Devotional with your contacts and let’s touch lives together.
Send inquiries, testimonies, and prayer requests here(WhatsApp): +2348034420524, +2348138224547 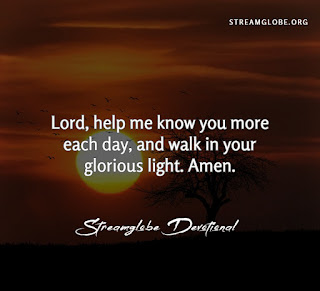