Matthew 18:33-35 (NET) “Should you not have shown mercy to your fellow slave, just as I showed it to you? And in anger his lord turned him over to the prison guards to torture him until he repaid all he owed. So also my heavenly Father will do to you, if each of you does not forgive your brother from your heart.”

One of the things that happened frequently when David and his friends went out on evangelism was the baptism of the Holy Spirit. They had so many testimonies that they believed God gave them the special gift of getting people baptized in the Holy Spirit. But on one occasion they met two women, the first was an unbeliever who received salvation that day and was immediately baptized in the Holy Ghost; she spoke in tongues and prophesied that day. But the second woman was a believer who desired to be baptized in the Holy Ghost but who didn’t receive the baptism after hours of prayers and laying on of hands on her.

It was just before they had given up on her that a member of the team received a word of knowledge, “who have you refused to forgive?” He asked. “My husband is a wicked man, he abandoned me and the children, he does not care, I can’t forgive him” she responded. “Oh! As long as you refuse to forgive him, the Holy Spirit won’t come!” David said gently. After speaking to her about the dangers of unforgiveness, she finally agreed to forgive her husband. Immediately after this, she became filled with the Holy Ghost and began to speak in tongues.

The man in today’s text who refused to forgive his fellow servant lost the pardon he earlier received, ended up in the prison, and secured torture for himself, while the woman in our story couldn’t receive Holy Spirit baptism because of unforgiveness. What has Unforgiveness cost you? Have you been imprisoned or limited because you refused to forgive? Are you currently being tortured because you won’t forgive those who offended you?

Go into today knowing that unforgiveness is one of the easiest ways to lose out of God’s blessings.

Prayer: search your heart for any trace of unforgiveness, forgive the person or persons, then ask God to forgive and restore you.
—Dr. Emmanuel James

If you wish to start getting Streamglobe Devotional Text & Audio early every day, Send us a message or Click here to join a Streamglobe WhatsApp Group☞ https://chat.whatsapp.com/IpIyi4YBzxJAMphlwMaNBW 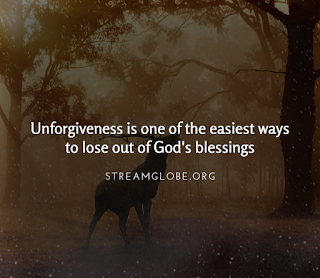