John 15:16 (NET) You did not choose me, but I chose you and appointed you to go and bear fruit, fruit that remains, so that whatever you ask the Father in my name he will give you.

Moyin noticed that the rate at which Kemi received answers to her prayers was really remarkable. There was a day they were traveling together, and it was about to rain and disrupt the meeting they were going for. Moyin had prayed and prayed in her heart concerning the rain, but nothing happened and the rain started. As soon as she called Kemi to pray, while Kemi was still praying, the heavy rainfall reduced and eventually stopped miraculously.

There were many other examples of how Kemi received from the Lord more, and Moyin became concerned. ‘Does it mean that God loves Kemi more than me?’ Moyin would ask herself. She went into days of prayer to seek God’s face concerning why He didn’t answer her prayers the way He answered Kemi’s prayers. This was when the Lord showed her that Kemi was a much more fruitful Christian than her, that this was why Kemi had God’s ear.

We can see from today’s Bible text that when we are fruitful, we can ask and receive more expressly from the Father. Many Christians have fruitless prayer lives because other areas of their lives are fruitless before God.

A fruitful Christian is one whose life and character manifest the fruit of the Spirit. He is also one who wins souls to the kingdom of God. He is a profitable servant of the Lord who uses his resources [talents and gifts] for the advancement of God’s kingdom in this world.

Streamglobe is Interdenominational and nondenominational. Kindly share this Devotional with your contacts and let’s touch lives together.
To start getting Streamglobe Devotional Text & Audio early every day, join our WhatsApp Group here☞ https://chat.whatsapp.com/GvVFJFXWXJMENumQjx4VcG
Or Send us a message on WhatsApp: +1 (515) 519-5600, +2348138224547
visit: www.streamglobe.org 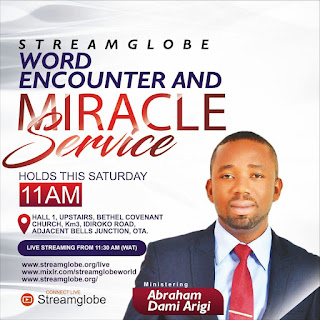